There was singing, dancing and festive cheer at the annual Castletroy and District Lions Club Christmas Senior lunch at the Castletroy Park Hotel last Sunday.

More than 70 invited guests from The Park Village and the Monaleen/Milford Active Retirement group, enjoyed a delicious three course meal, then donned their party hats and danced to the music of Pat Keating and the Clampers band.

This is an annual event sponsored by the Castletroy and District Lions Club.

“We were delighted with the event, and that everybody enjoyed themselves. I would like to thank the staff who were so pleasant and cheerful and the food was delicious. Of course Pat and the band were fantastic and encouraged everybody to sing and get involved,” said Castletroy and District Lions Club President Ms Rita O’Donoghue.

Every Lions Club supports a range of projects in its local community, including health and youth and senior initiatives by organising fundraising activities, and every penny raised goes back into the local community.

In Ireland more than 20,000 people have taken this course since it was development in 1983, more than a million people have taken the ASIST course, which is a two day workshop in suicide first aid. The Living Works’ ASIST programme was developed in Canada in 1983 and is a Health Service Initiative (HSE) started in 2003. Starting in Canada in the early 1980s, More than half a million people have participated worldwide – over 20,000 in Ireland. The NOSP was formed directly after the launch of Ireland’s first suicide prevention strategy; Reach Out: A National Strategy for Action on Suicide Prevention 2005-2014. The NOSP coordinates ASIST at a national level.

The course trains participants to reduce the immediate risk of a suicide and increase the support for a person at risk. It also provides opportunities to learn what a person at risk may need in order to keep safe and get more help and it encourages honest, open and direct talk about suicide as part of preparing people to provide suicide first aid.

Gary, who is a Swiftwater and Flood Responder Instructor joined the Civil Defence in 2010 said, “A huge part of what we do is search and rescue. Often the person we are searching for may be in a distress state with intent to harming themselves. Our goal is to find the person before any harm can come to them. Once found it is vital to keep the person safe until they receive the help they need. I knew from talking to others that have done this course that it would give me the skills to keep that person safe.”

“Apart from meeting some fantastic likeminded people, I feel I gained a lot from the course. It gave me the confidence to approach a person in distress. The skills I learned gave me a clear end goal and a structure on how to get there. It was emotionally tough at times but well worth doing,” added Gary.

The Castletroy and District Lions Club host the ASIST every year.

For people who are affected to www.yourmentalhealth.ie for further information on services and also the 24/7 free phone numbers for Samaritan’s 116123 and Pieta House on 1800 247 247 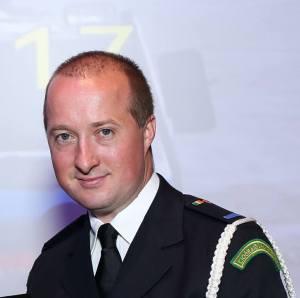 Walking in the Air and a selection of Christmas favourites will be performed by the University of Limerick Orchestra (ULO) at their annual Christmas Concert, a great way to get you into the spirit of the festive season.

The concert will include performances from award winning Limerick choir Laurel Hill Coláiste FCJ conducted by Orla Colgan Ahern, and Boy Soprano Daniel Ryan who is a student of Limerick School of Music teacher and soloist Emma English.

Conducted by Liam Daly, the orchestra will also perform Dvorák’s Symphony No. 7 Op. 70 and the Hungarian March from the Damnation of Faust by Berlioz.

Established in 1992, ULO is an amateur, community orchestra, the musicians are students and staff from the University, Mary Immaculate College, the Redemptorist Centre of Music, the Limerick School of Music and from other music schools across the region, and is funded by the University of Limerick. 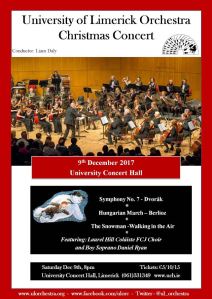