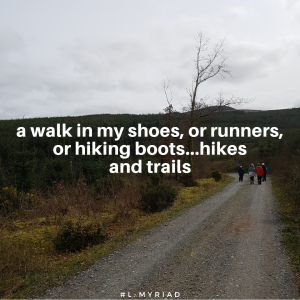 While gazing at Instagram during that lazy week between Christmas day and New Year’s day when time seems to stand still, bleary eyed from late nights of endless games of Monopoly, and watching films at 3am , I came across a friends Instagram story that stopped me in my scrolling.

He had posted snow filled photos with drifts that were as high as his chest. Intrigued I messaged “Where are you? The North Pole?” To my surprise he replied that the arctic photos had been taken while he was trekking at Keeper Hill.

This exchange reminded me, as I sat wrapped in a fleece blanket in a warm house, that I had always wanted to try hill walking, and with the New Year resolutions looming, I quietly made a promise to myself that I would follow up on this long held ambition.

My experienced hiking friend suggested I join the Ballyhoura Bears club, which I had looked into many years ago, but just never got around to joining. 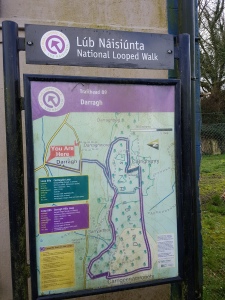 So my first hike was up the Castlegale Loop near Kilfinnane. I met with the club members at the base of the trail. They were all kitted out for their trek, with hiking boots, trekking poles, fleece headbands to keep their ears warm and back packs filled with bottles of water, nibbles and warm drinks. I decided to try out my new venture to see if I enjoyed it, before I committed to buying the T-shirt, or equipment. 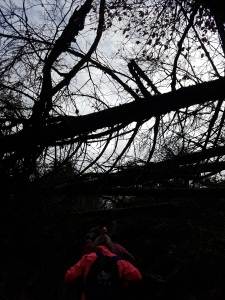 As we climbed the first part of the trail, my runners did not stand me well as my feet kept slipping in the squelchy mud, and they were soon filled with water. We climbed a stony slope, ducking under fallen trees, through sludgy pools, slipping and sliding, laughing like children as we tried to stay upright. 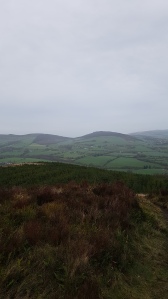 Eventually we reached the summit and the views and beautiful scenery made the climb worthwhile. As the wind howled and swirled around us, I was amazed at the sense of achievement that swept over me, a little bit of that Everest feeling that mountain climbers must feel, from conquering the elements. 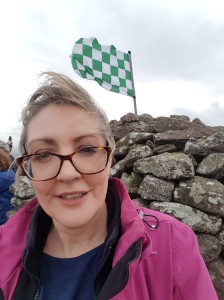 Me windswept at the summit of Castlegale

Runners alright on the Greenway

At this point I decided to join the club as I had enjoyed the last hike so much. 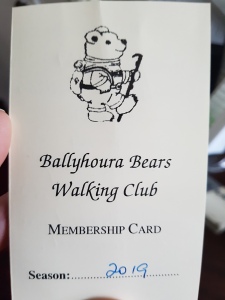 The next outing was a 13K charity walk on the Greenway which started at the back of Rathkeale Hotel and goes to Newcastle West.

Like many of these Greenways around Ireland, it used to be the old railway track, and is now a great trail for both cyclists and walkers.

The countryside scenery was lovely, a different angle on an area I have known most of my life. This time my freshly cleaned runners were the right footwear for this walk, that was more of a test of endurance than skill. I found my pace and reached my destination, where a welcome cup of tea awaited us, it mostly spilt all over me as I struggled to hold the mug in my numb hands, but the drop of tea I managed to sip never tasted so good.

My new hiking boots were christened in the Ballinaboola Forest, they weren’t really necessary, runners would have sufficed, as there was a good roadway through the forest. This also seems to be an ideal track for mountain bikers, as we passed many of them on the way. 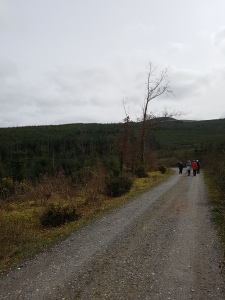 Physically I found this the most challenging hike so far, as it was a continuous upward incline, and the way back down was tricky too.

Good for the mind, body, spirit

I have enjoyed my adventures with the Ballyhoura Bears so far and look forward to discovering more tracks and trails in our beautiful countryside. Is Everest calling? You never know. For me nothing can beat the outdoors, being active and being in the heart of nature.

It’s both physically and mentally stimulating, and in a time when we are constantly being reminded to mind our mental health, it’s a pastime that ticks all the boxes. Maybe I’ll try mountain biking next.

I would like to take my dog, but since she finds a fifteen minute walk around the block challenging, I think I would probably end up carrying her most of the way.

Missy at the beach in Lahinch