Author Patricia Byrne delves into on of the darker chapters of Irish history for her latest book, ‘The Preacher and the Prelate: The Achill Mission Colony and the Battle for Souls in Famine Ireland’.

It recounts the story of an evangelising colony established by Edward Nangle on the slopes of Slievemore, Achill in the nineteenth century. The colony became infamous during the Great Famine with charges of enticing people to change their faith with promises of food and material benefits known as ‘souperism’. 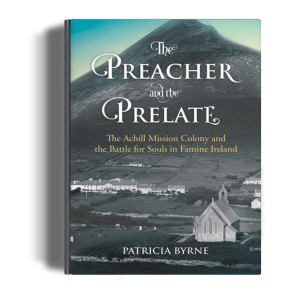 “I have a special affinity with Achill Island and its stories. Over the years, in visiting Achill, I came to realise that within its shores were packed some extraordinary stories, none more so than that of the Achill Mission Colony.

“The colony is a microcosm of nineteenth-century Ireland, famine, emigration, landlordism. I became engrossed in the story and could not let go of it. It was as if, by researching and writing it, I was walking through my own history,” said Patricia.

Born in County Mayo, Limerick became Patricia’s home in the 1980’s when she relocated to work in Shannon Development, where she worked on regional and economic development in the mid west.

Patricia has a BA from Maynooth University, an MBS from University of Limerick and in 2006 she completed a Masters in Creative Writing at National University of Ireland (NUI) Galway, and since her retirement has been writing full time for about ten years.

Patricia has already published a poetry collection, ‘Unstable Time’ in 2009 and her book ‘The Veiled Woman of Achill: Island Outrage and A Playboy Drama’ which was published in 2012 tells another Achill story, about a notorious island crime of 1894 committed at the Valley House in north Achill.

She most enjoys writing narrative nonfiction, “I research my stories but write them using fictional techniques to read like a novel. I also like to write memoir essays where aspects of my own life are intertwined with other material as in my essay ‘Milk Bottles in Limerick’”.

Patricia was included in last year’s list of ‘Notables’ for Best American Essays for her piece ‘Milk Bottles in Limerick’ which linked her life in Mayo and Limerick, “through the prism of Heinrich Boll’s essay on Limerick in his Irish Journal”.

“I find that when I am immersed in research and writing a story it becomes an obsession. Even when not directly involved in the work, it never seems to leave me.

“I find I feel compelled to visit the places where the story takes place. So there have been many trips to Achill Island, to Dugort and Slievemore, to the Deserted Village and other wonderful places in Achill”.

Preferring to write daily and in the mornings, Patricia’s favourite spot is at a desk on the first floor of her house that catches the morning sunshine, from where she can admire a horse chestnut tree in her garden and a neighbouring cat that crawls along the top of the wall to keep her company.

Bestselling author Roisin Meaney, has just published her fifteenth novel, ‘The Anniversary’, despite suffering from the debilitating condition chronic Insomnia.

According to the Health Service Executive (HSE) website, Insomnia is difficulty falling or staying asleep for long enough to feel refreshed the next morning, some of the side effects are feeling tired, lack of concentration, irritability and not being able to mentally or physically function effectively for normal daily routines.

Roisin, who has lived in Limerick most of her life, has had insomnia for more than ten years, and has tried every type of exercise and alternative remedy to have a full nights slumber.

“I’ve meditated, I’ve lain on a yantra mat, I’ve done yoga, I’ve listened to whale music, I’ve taken supplements that are known for sleep inducing properties… you name it, I’ve done it, or swallowed it.

“I take half a sleeping tablet that I buy over the counter in Spanish chemists. After trying a gazillion other remedies, alternative and otherwise, this is the only one that works. Every few nights I don’t take it, and I don’t sleep,” said Roisin.

Though she has no idea what might have triggered the insomnia Roisin said, “I have no mental or physical issues that might be causing it. Perhaps the creative process has something to do with it, I used to think it might be, but now I’m not so sure. If I’m not writing I’m generally thinking about the next book, but I’m not convinced it’s the culprit. I mean, I’m currently on book number sixteen, you’d think my system would have adapted by now.”

Despite having Insomnia, Roisin still manages to keep her busy routine of writing daily, and all that being a modern successful author entails, such as book readings, speaking at book festivals, interviews for television, radio, newspapers and keeping her social media up to date as well as replying to fans of her books.

Though she has tried to structure a nap into her daily routine it has not worked.

“No matter how tired I feel I seem incapable of napping. I so envy folk who can grab half an hour of sleep whenever they want. Thankfully, I’m still producing a novel a year. Of course, they might be better novels if I slept well, but that’s for another day,” joked Roisin.

‘The Anniversary’ which is now available in bookshops, centres around a couple, Lily and Charlie, who split up four years earlier and who are coming together to spend a weekend in the house where Lily grew up, and where they spent summer holidays when the children were small.  Accompanying them are their respective new partners, their two adult children and their daughter’s partner.

Last October Roisin purchased a small cottage in Miltown Malbay in Clare, where her cat has also settled in and she goes for regular early morning walks on the beaches.

“Since then I’ve been dividing my time between Clare and Limerick, and I’ve been met with nothing but friendliness and warmth from the locals. I’m a total blow-in, but they’re OK with that.”