This Culture night you will have an opportunity to see Tenor Owen Gilhooly and Soprano Helen Houlihan join forces in concert for ‘From Buenos Arias to Broadway’. 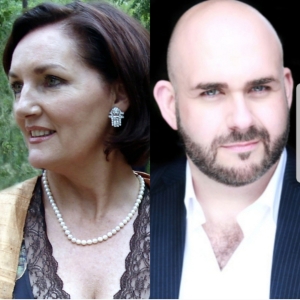 Director of the Mid-West Vocal Academy (MWVA) Owen and Teacher at the MWVA Helen will be joined by pianist Michael Hennessy, violinist Hugh Connelly and Tom Murphy on viola.

The audience friendly free concert will have something for everyone, with popular operatic arias and songs from stage and screen, including a selection of Irish songs, Broadway hits, and popular arias. Instrumentals will include tango music from Latin America. 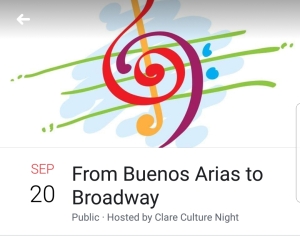 It’s been a busy summer for Director of the Mid West Vocal Academy, Tenor Owen Gilhooly.

When most people are unwinding in the summer sun, or rushing to the beach at every available opportunity, Owen relishes his free time so he can concentrate on his solo career.

“I actually love the summer as when I’m not teaching four to five days a week, I can really focus on my own practice and learning, and I try and fit in as much performance as possible and really challenge myself,” Owen smiled.

So far this summer Owen has  given performances in Dublin including ‘Waltz of my Heart’ at the DLR LexLcon, an Opera Gala at the Liberties Festival and was guest Tenor at Léran Festival of Music in France.

Owens next big performance will be the title role in Faust for Opera in the Open in Dublin on August 22,  and on September 25, he will join the RTÉ Concert Orchestra at the National Concert Hall along with other guest soloists which include Celine Byrne and Claudia Boyle, to celebrate Cara O Sullivan in ‘Cara: A Celebration’.

Does Owen ever take a complete break from music or singing to completely switch off?

“Yes, I do, it’s really easy to get burned out from all the demands, so I do take the odd weekend off and I make sure to have some short breaks over the summer too.  Vitamin D is essential.

“ Being self employed it’s also sometimes very hard to switch off, so there has to be discipline to rest as well.

“I’m also trying to finish my doctoral thesis,  so watch this space, next year I’m hoping to be Dr Gilhooly,” added Owen. 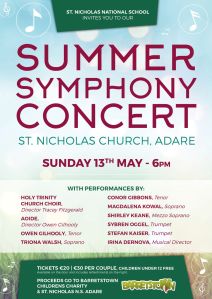 The Summer Symphony Concert in St Nicholas Church Adare on Sunday May 13, promises to be a treat for music lovers.

The soloists will be joined by Aoide Choir under the direction of Owen Gilhooly and the Holy Trinity Church Choir conducted by Tracey Fitzgerald.

The concert, under the musical direction of accomplished pianist Irina Dernova, will be enhanced by trumpet players Sybren Oggel and Stefan Kaiser who  will also perform for this special concert, all proceeds from the concert will go to Barretstown Childrens Charity and to St Nicholas National School Adare.

Tickets are €20 or €30 per couple and Children under 12 years of age can attend free of charge. Tickets will be available at the door on the night of the concert.

Tickets will sell fast so make sure you are there in plenty of time to avoid dissapointment. The Concert commences at 6pm.