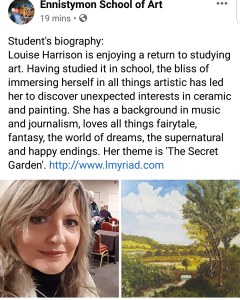 I wound my way around the narrow streets of Tralee, getting lost, asking passers-by, do you know Jane Hilliard, the artist? To which they would reply, “Oh, the artist, yes. Walk through the large pedestrian area…” eventually I found the shopping centre, where the numerous empty shop units gave an atmosphere of an Egyptian tomb. I turned a corner and found the treasure, vibrant paintings gave life to empty units. Paintings of Irish countryside, woodlands, the sea, heavenly, calming scenes which, when studied for any length of time, absorb you into their world of nature and beauty.

I followed the paintings and they led me to Jane Hilliard’s Gallery, where numerous framed canvases adorned the walls, some leaning two and three deep on the floor against the wall. At the back of the Gallery, Jane, wearing a multi-colour paint speckled denim shirt over her clothes, sitting with head bowed as if in prayer, was working on a painting.

I first met Jane four years ago in Draíocht Gallery in Adare, Co Limerick. The lasting impression of her paintings, along with her detailed, interesting way of describing her work made an indelible impression on me. Little did I know then what she had endured and overcome while all the time her artistic spirit drove her on through health and economic challenges, to become the stunning, self-taught artist that she is now.

Though well established in Kerry and known throughout the country and indeed internationally, Jane will soon be spreading her wings, with offers to show her work throughout Ireland. However, it hasn’t been an easy path.

Born in Britain, her family moved to Kerry when she was ten. At twelve, she had to leave school to mind her mother who became terminally ill and died when Jane was just 15. Shortly after that her father returned to Britain and the family home broke up. Two years later she married, went on to have three children and now delights in her grandchildren.

Jane’s natural artistic ability was nurtured by her father who taught her how to draw, but it wasn’t until her late thirties, that she took a few art classes in Tralee and at the end of term exhibition, her paintings sold which led to her getting commissions from local businesses.

Jane feels she has developed her style through trial and error. She paints from her own photographs, “When I start a painting, I really don’t know what way it’s going to end up. I have developed skills, ways of throwing in a bit of light or splashing on a bit of sparkle.”

Indeed it is Jane’s magical use of light that makes her paintings utopian scenes, places you would like to be, and stay, serene and calming. This may be a reflection of what painting is to Jane, a type of meditative state, when she tunes into a higher energy. Many times she has felt her work comes from something that has been channelled through her, instead of something she has created.

Jane describes herself as a commercial artist because she was the main bread winner in her house, she has had her gallery in Tralee shopping centre for14 years. During the boom she couldn’t paint fast enough, mainly popular tourist scenes of Ballyheigue and Killarney for which she has received criticism from people who prefer more abstract types of art, “When you have an exhibition, it’s very different from most other jobs because it’s almost like putting your children up for criticism.”

From the time Jane began painting full time, she painted for nine hours a day, only taking Sunday off to do housework. She continued this routine until she got cancer ten years ago, only then did she take another day off in the week.

Painting to Jane is, “a thirst, that need to drink. It’s like a meditation, a therapy, people pay hundreds of Euros to get to that place in their head, where there’s no worry no stress. It relaxes me. Just put me in a corner and let me paint. That to me would be heaven.”

The dream for Jane would be for somebody to walk into her gallery and say she is exactly what they are looking for, take her on as a client, promote her, take over the business side and set up her exhibitions internationally.

“It is a dream. But coming from a very poor background, I never forget where I’m from and that I’m just so lucky. When my mother died I was given my mothers purse, empty, to run the house. I have worked very hard, always. And it’s like, I’ve built this now and I have to keep minding it. So it’s part of me and yet it’s a separate entity that I have to mind and take care of, and I have to see it do well because, I feel I have been given a gift and an opportunity so I owe that the very best I can do,” smiled Jane.

Jane in her gallery